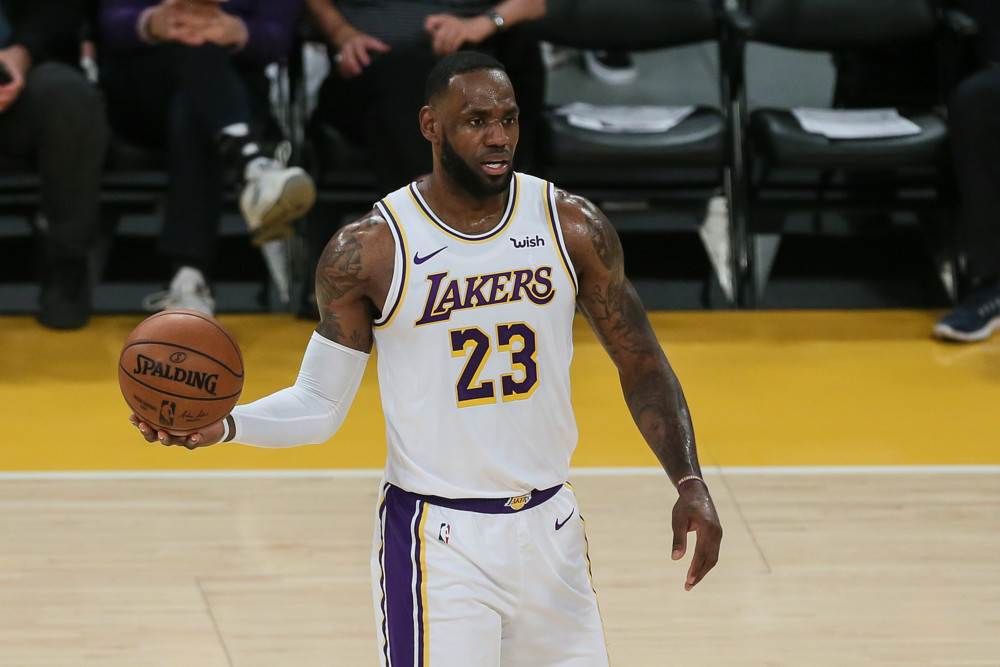 Handicapping the NBA: LeBron, Durant or The Field for Finals MVP?

The NBA postseason is underway, and while there's plenty of betting to be done on a nightly and game-by-game basis, there's still some value to be found in the futures market. With awards voting closed, the offerings are fairly limited, but this gives us a chance to hone in on the Finals MVP odds at the DraftKings Sportsbook.

Unsurprisingly, LeBron James and Kevin Durant sit atop the board, with James holding a slight advantage after the Lakers' Game 3 win over Phoenix (as of Thursday night, James and Durant were tied at +400). Giannis Antetokounmpo and Joel Embiid lurk just below with both teams well in control of their respective Round 1 series. Let's take a look at the cases for each of the favorites, as well as highlight a few other candidates worth monitoring.

With three Brooklyn Nets players in the top seven, it's clear which team is the (rightful) title favorite midway through Round 1. In Game 2, especially, the Nets decimated the Celtics and offered a glimpse of just how explosive the Durant-Harden-Irving trio can be when all three are healthy and locked in.

It makes sense that James and Durant sit atop the board with similar odds. Brooklyn is more likely to make -- and win -- the NBA Finals, even if the Nets' path through the East might be tougher than the Lakers' out West. But there's a decent chance James Harden or Kyrie Irving could snatch Finals MVP away from Durant.

As was the case last season, if the Lakers win the Finals, James is getting Finals MVP -- end of discussion. Anthony Davis had a few really strong games in that series against Miami and James was still the unanimous winner. If the Lakers climb the mountain for a second straight year, it will be because of James.

Giannis Antetokounmpo (+500) and Joel Embiid (+750) loom as decent values in the next tier. Antetokounmpo moved up from +600 following Milwaukee's Game 3 beatdown of Miami. While I'm not yet sold on the Sixers as a true championship-caliber team, they have the far easier path to get to the Finals, as a Milwaukee-Brooklyn showdown looms in Round 2. I would pick either of those teams over Philly in the Eastern Conference Finals, but if the Sixers do make a run, Embiid would be the obvious Finals MVP.

The same goes for Antetokounmpo. Like the Sixers, the Bucks have some great complementary pieces, but if Milwaukee wins the Finals it means Antetokounmpo had a monster series. There's really no other path to a title for the Bucks, which is completely fine. Needing an all-time-great series from your all-time-great player isn't a bad thing. Getting past Brooklyn in Round 2 could prove to be the most difficult challenge of all, but if the Bucks can pull the upset, they could very well emerge as the odds-on title favorites heading into the Conference Finals.

Further down, the case for Donovan Mitchell at +1000 is essentially the same as that of Embiid. The Jazz are on the opposite side of the bracket from the Lakers, and a relatively favorable matchup against Dallas in Round 2 may be brewing. As with Philadelphia, I'm skeptical of Utah's ultimate upside, but if you're a believer, you could do worse than getting Mitchell at 10/1 -- especially after the obvious spark he provided in Game 2.

In terms of longshots, there's not a lot here. It's almost impossible to imagine any team but the Nets, Bucks or Sixers representing the East in the Finals. The West is a bit more open, but that could change if the Lakers flip the switch and LeBron James starts to look more like LeBron James. However, given his age, and how the first three games have played out, that's no longer a guarantee.

If you're still iffy on the Lakers and looking for a true hail mary play, Devin Booker at +9000 may be worth a (very light) sprinkle. If the Suns manage to turn the series around and get past the Lakers, they'll head into a favorable Round 2 matchup against Denver or Portland with a much healthier version of Chris Paul. After that, Utah or Dallas would likely be the final challenge, and the Suns would have to feel good about their chances in either series.

Paul, himself, might make for an even better (and even riskier) hail mary at +15000. Booker would probably outshine him, statistically, in a hypothetical Finals series, but some voters could lean on the narrative of Paul's leadership and the dramatic turnaround his addition sparked. Before Paul showed up, the Suns hadn't made the playoffs in over a decade. Finals MVP would essentially be a lifetime achievement award for one of the best players of the last 30 years.

Obviously, none of this matters if Phoenix can't handle the Lakers in Round 1. That's a massive hurdle in and of itself, and it's unlikely to happen. And even if the Suns are able to complete the upset and navigate through the next two rounds, the most difficult challenge of all would be actually winning the Finals -- a necessary step for Booker or Paul to take home the MVP.

Luka Doncic (+1600): If Dallas can complete the upset of the Clippers, there's no reason to believe they can't push the Jazz in Round 2. Utah is the one seed for a reason, but the Jazz aren't exactly your typical top-seed juggernaut. In the end, Dallas probably doesn't have enough support around Doncic to win three more rounds, but he's already proven more than capable of putting the team on his back.

Ben Simmons (+9000): I know I said Embiid would be the obvious Finals MVP if the Sixers win it all, and while I do believe that's the case, there's still a path for Simmons to be in the conversation. If Andre Iguodala can take a Finals MVP over Stephen Curry, Draymond Green and Klay Thompson, then anything is possible. Like Iguodala, the case for Simmons would likely rest in his defensive value. If the Sixers match up against, say, the Lakers in the Finals and Simmons holds James to 20 points per game on 42 percent shooting, that could be enough to sway voters away from Embiid, who would almost certainly have the better statistical case.

Kawhi Leonard (+2200): Everyone is ready to write off the Clippers after losing the first two games at home, but the series could quickly swing in the other direction if LA is able to bounce back Friday night. The way they've played thus far, that does seem unlikely, but Leonard and Paul George should be able to steal at least one game in Dallas. Granted, nothing about this Clippers roster screams NBA Finals winner right now, but it's too early for me to completely write off Leonard, who already has a pair of Finals MVPs in his back pocket. If the Clippers manage to drop Game 3, then please kindly disregard this entire paragraph.